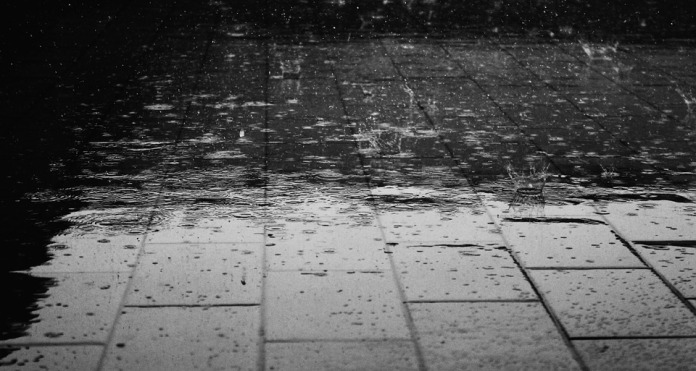 It rattles softly at the window like the fingers of a child as I sit on the edge of the tub to tie my shoes. It comes down the glass in crooked paths to stir my heart absurdly as it always has, and dear God in Heaven, the sound of it on the roof, on the taut black silk of the umbrella, on the catalpa leaves, dimpling the glassy surface of the peepering pond. It is the rain, and it tastes of silver; it is the rain, and it smells of christening. The rain is falling on the morning of my first day, and everything is wet with it: wet earth, wet fur, the smell of the grass when it is wet, the smell of the wet pavements of the city and the sound of tires on the wet streets, the wet hair and face of a woman doing errands in the rain. Wherever my feet take me now, it will be to something wet, something new, that I have never seen before.

-Frederick Buechner, The Alphabet of Grace

It was a cold, rainy morning and going to church was the last thing I wanted to do.

It’s going to be so crowded . . . the message will be watered down . . . you’re just going to have to watch a bunch of baptisms of people you don’t even know. I mean . . . baptisms on Easter? How cliché can you get?

It was Easter Sunday, 2009, in Seattle. I had only been attending the church for a month, and I had already decided the Easter baptism service was going to be over-produced and emotionally manipulative. All I wanted to do was drink my coffee in my robe and watch a Friends marathon.

Yet I felt a prompting, and my feet led me up the hill to church.

My dragging feet (and curled hair and carefully applied make-up because, Easter) made me late, so I sat high up in the balcony. I floated through the service, halfway listening to the message, halfway worshiping in my heart.

But then a soft-spoken guy in a black t-shirt walked up to the microphone. He shared he had grown up Catholic and was baptized as an infant. That he had begun to think very differently about faith when he was in high school. And how, as an adult, his faith had become just that—his faith. It was a personal thing that he didn’t talk about with anyone. He thought it was enough to have this conversation with God on his own. But without the support of a community, he found himself making decisions that were leading him away from God and that ultimately caused him great sadness.

My heart began to pound. I could hardly breathe. He was giving voice to a piece of my own story.

His face radiated with beauty and ease as he spoke about the promise God had given him through Jesus—that it was through Jesus’ strength and sacrifice, through his goodness and love—that he was redeemed and made new each and every day. With a huge smile, he walked to the baptismal pool and made a public commitment of faith.

After the baptisms, our pastor announced we’d be entering into a time of prayer and worship. I bowed my head, feeling heavy and sad as a stream of dark memories came flooding through my mind. I brushed a few tears from my cheek.

Yet cutting through the barrage of my iniquities and my litany of confessions was a surreal sense of peace.

I began to feel like maybe it was time to actually let go.

The pastor was still talking. “We’re going to do something different today. We’re going to keep the baptisms going. If any of you feel the Spirit moving in your heart, you are welcome to come up here.” My head jerked up.

“As you are praying, remember that you are dealing with an audience of One. It’s not about where you are.”

You are wearing your Easter dress, Erin, don’t be silly.

“It’s not about what you’re wearing — in fact, we have towels and sweatpants for you here backstage.”

Of course they have sweatpants for you. They’re hawking mass-produced Christianity, here, Erin. What a production.

“It’s not about the production, or the people, or the day. It’s about you and Jesus.”

I looked down at my dress, spotted with tears.

The feet I stood on felt like lead. My body trembled as I made my way down the stairs, through the hallway, down the aisle, and to the front of the stage. The man in front of me turned and offered a smile. “Nervous?”

Somehow I made my way up the steps and into the pool. And when the pastor turned to me and asked if I was ready to fully put my trust in Jesus, my answer came immediately and with power: YES.

When I resurfaced from the water, I couldn’t stop smiling. Joy radiated through my body.

I was wet, bedraggled, with mascara running down my face.

I had never felt more beautiful.

Originally appeared on All In