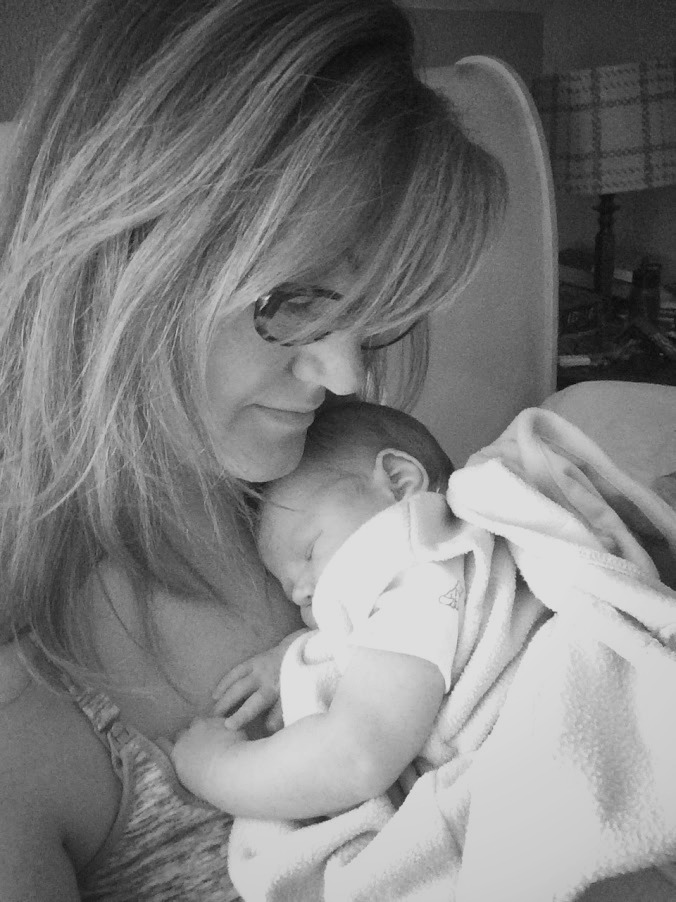 At the end of Jacob’s first week, I hobbled into my midwife’s office, bleeding and crying and snotting all over the place. She asked me how we were doing. “I’m bruised,” I said. “I’m bleeding. This is the hardest thing I’ve ever done.”

Tell me I don’t have to do this, I begged her with my eyes.

At first, both my boys latched like naturals. For the first hour or so after birth, I congratulated myself on knowing what to do. Such a natural mother.

Mere hours later with Jacob, my first, I began to experience intense pain when he would latch. One of the nurses encouraged me to self express with my fingers, to use a spoon to make sure he was getting the precious liquid gold, even if he couldn’t latch properly. So I did.

The next morning he was fussy, inconsolable. Another nurse asked me how long it had been since the last feeding. Four, maybe five hours earlier I had expressed some colostrum. Could it really be time to do this again? I was already bruised and discouraged. I registered the shock in her eyes: four to five hours? This baby needs to eat. Apparently I wasn’t a natural after all. A lactation consultant asked me to show her how I was feeding him and to my disbelief she praised me on our technique. Gold star, baby! I began to breathe easily again.

The relief was short-lived.

Once we were home, I dreaded feedings. He wouldn’t latch properly. He’d scream until he was red and then, once latched, would cause me to bleed. Even when we were lucky enough to latch well, I wasn’t producing enough to satisfy his hunger. I began to feel the prickle of fear and resentment every time he cried. And then I felt guilty—wasn’t I supposed to be enjoying this? Weren’t we supposed to be bonding?

At his first pediatric check-up, our doctor came through the door while he latched—well, for the first time in hours—and drank and drank and drank. I was ecstatic – Look! We’re doing this! Even so, we learned he had lost 10% of his birth weight, and they told me I needed to supplement with formula.

I felt like a failure. The words of the instructor of the hospital’s breastfeeding class rattled around in my head. She had told us she wouldn’t even talk about formula because she knew we wouldn’t “give in to the temptation.” She told us to be on the lookout for formula samples that would come in the mail. “Throw them away immediately,” she said. “You don’t want to give in at 3am when you feel like you’re about to lose your mind.” Pre-birth, I resolved to do whatever it took to breastfeed my son, no matter how I felt about it in the moment.

But at 3am, in the face of my screaming, (starving?) newborn, feeling like I was about to lose my mind, I “gave in” and followed the instructions of his doctor, feeding him the formula I had asked my husband to buy at the store that day.

I still felt like a failure—I wasn’t enough for him. But for the first time in his three days of life, he slept soundly and peacefully and longer than 45 minutes. Finally, he was satisfied.

I met with a lactation consultant a few days after seeing my midwife, and braced myself for a lecture. When she asked me how it was going, I burst into tears. “I’m not sure I can do this,” I said. I gasped for breath, struggling to find the words to speak the truth I hadn’t wanted to face: “I’m a sexual assault survivor . . . and I just . . . I can’t . . .”

There it was. Nursing my child was a triggering event. I resented my newborn and felt so ashamed.

She handed me a box of tissues and put her hand on my arm. “You don’t have to do this,” she said. “I don’t say that lightly; it’s my job to convince you otherwise. But you have got to take care of yourself. The most important thing you can offer this boy is your love and your presence. Take care of yourself first so you can give him the love that he needs.”

I pumped for a month. Every two hours I’d go up to Jacob’s room, turn on Gilmore Girls, and pump pump pump away. My mom and husband helped hold him and feed him and gave me a break to shower and rest. But then my husband went back to work and my mom went back home. He wasn’t content to sit with me while I pumped. He screamed. And screamed. And suddenly I was faced with a terrible predicament: do I sit here and pump and let him scream? Or do I skip the pump, pick him up, and feed him more formula?

I set the pump down. I made a bottle and brought him to my chest. And I stared into his eyes and sang him songs and told him how precious he was to me.

It wasn’t long before I saw the effects of bottle-feeding: Jacob and I both were sleeping better. The tension in my shoulders released. Rocking him and feeding him became my favorite time. My prayers shifted from laments and requests for peace to songs of quiet praise.

My perinatal therapist diagnosed me with postpartum anxiety, and with her help I learned to re-tell the story of feeding Jacob as one of great hope and love: rather than give in to the fear of failure or let my heart grow bitter from resentment, I had chosen to change course so we could flourish in our new relationship as mother and son.

In those days I began to see how inextricably linked self-care is to the well-being of our children.

And something strange happened. I began to enjoy this time with my son. We had figured it out. We did it together. I quietly rejoiced as he fed, feeling so much pride and love and connection.

Rather than triggering me, he was healing me.

But I still wasn’t producing enough milk. I could tell he wasn’t eating enough. So we began to supplement.

As much as I was (mostly) enjoying the time nursing Henry, I couldn’t figure out how to stick it out for the long term; we had a big move on the horizon and my stress level was at all-time high. Jacob, only 19 months, needed lots of love and attention in the wake of his baby brother’s arrival. I didn’t know how I would make the time to pump to increase my supply.

When, in his second week, Henry began to clusterfeed, my confidence dwindled even further. Feedings became more painful, he became more frustrated, and the old familiar feelings of dread and resentment began to creep their way into my heart each time I heard him cry.

On day ten I made cold cabbage compresses and stuck them in my bra.

Today, both kids have oatmeal in their hair and peanut butter on their faces. Jacob hates tomatoes while Henry eats marinara by the spoonful. Both boys are great eaters and generous with their affection.

They are nourished and they are loved.

There are still those moments, as I hold them close before bed, when I dream of how wonderful it could have been. I am wistful as I imagine a calmer, more integrated version of myself who could have handled the stress of the moments that come barrelling so quickly at mothers so soon after birth. It is easy to long for a more idealized version of the mother I wish I was and could have been.

But then I remember I am doing the best that I can. I nourish myself these days with food and sleep and long showers and slow runs by the ocean. I take care of myself well so that in the ever-present stress of motherhood I can attempt to present my children with the best version of the woman I am today.

And that, I am convinced, is enough.

This post originally appeared on the Good Mother Project